Makerere University has received a grant worth one million US Dollars to support competitive fellowship programs for early career academic staff.

The grant, from Carnegie Corporation of New York, is to run from October 2019 to October 2021.

A group of students at Makerere University have expressed misgivings about the ongoing beautification and fencing off of the Freedom Square.

The students say that, far from making the Square look beautiful, the management could institute restrictions on students wishing to access Freedom Square, a legendary gathering point for both formal and informal activities at Uganda’s largest and oldest university. 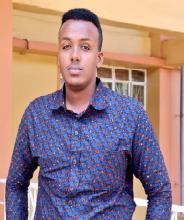 A cabinet minister in Makerere’s 85th Guild has decried what he calls a high level of discrimination in the student politics.

Ahmed Abdirahman, a Kenyan national, says that rising from the lower ranks to the guild council (GRC) and then cabinet wasn't a walk in the park but a battle against discrimination. The minister says that politics at Makerere University is highly sectarian along political, tribal and nationality lines.