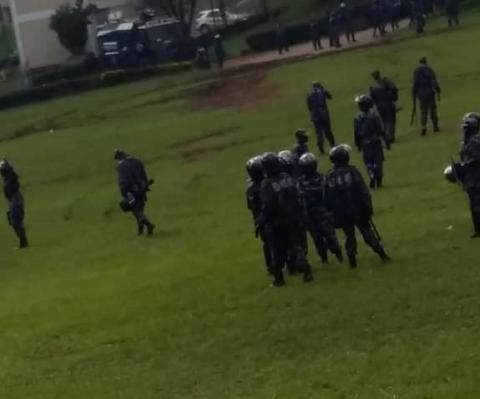 Police on Wednesday morning dispersed students who had gathered in the Freedom Square for a general assembly.

The students had been called by the Guild President, Julius Katerega, who wanted to give then an update from the meeting he had with the university management on Tuesday regarding the tuition policy that has caused a week-long strike. He also wanted to discuss with the students on the way forward now that the university administrators had declined to rescind the policy.

But before the meeting would kick off, police thronged the Freedom Square and ordered all the students to disperse forthwith which sparked a scuffle as some students tried to reject the order. To quell the situation, police fired teargas which forced the students to scatter in different directions as they hurled insults at them.

One police officer identified as Abulekam was overheard ordering students to either run to their lecturer rooms or risk being beaten to pulp. Two students, who are yet to be identified, fainted during the scuffle and have since been rushed to the University Hospital for medication.

The strike against tuition increment at Makerere University started earlier last week. The policy aims at increasing tuition fees by 15 per cent every academic year for the next five years. But students say this would be too much and unfordable especially for learners who are from humble backgrounds.

Also, a number of government officials have since spoken out about the strike. For instance, the First Lady and Education Minister, Ms Janet Kataha Museveni, issued a statement yesterday, saying students had been bribed by politicians from opposition political parties to strike. According to her, there is no sensible cause for the strike.

On his part, the President of Uganda, Yoweri Kaguta Museveni, has only ordered the military out of the campus while a number of Members of Parliament have asked the Vice Chancellor, Prof Barnabas Nawangwe, to resign, saying he is inefficient.