Betway Kobs have lifted the Uganda Rugby Cup to end a two-year trophy drought, beating the Black Pirates 21-14. The Lugogo-based team came from behind to turn tables round and ensure a well-deserved title over the Pirates.

Pirates took the lead in the tender stages of the game converting two penalties plus a quick try on Musa Muwonge's account. This was before Adrian Kasita managed to convert a penalty for the Kobs. 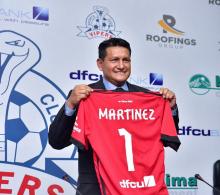 Vipers SC’s new boss Javier Martinez Espinoza has maintained his 100% record in the Startimes Uganda Premier League after his side defeated the newly promoted Nyamityoboora FC, 1-0.

The Mexican-born tactician registered a third win of the league in a row for his new club Vipers SC following his arrival at St Mary’s Stadium, Kitende.