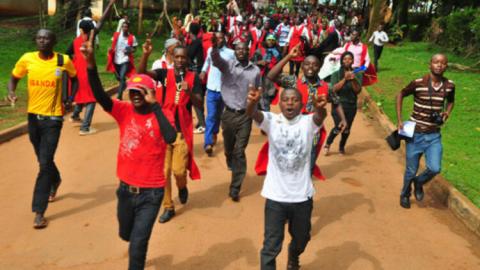 Makerere University government-sponsored students on Friday June 10th, 2022 protested the delayed release of their semester allowances. The students are entitled to get allowances for food and living-out allowance for those not staying in the university halls.

The group led by their president, Omaria Oitebbe stormed the Senate building to demand for their financial benefits which they say had been overly delayed.

Addressing the press conference after a meeting with the university bursar, Omaria revealed that the university had pledged to pay half of their allowances, as they wait to receive money from government to complete payment.

However, the students rejected the partial payment and went on protest, prompting the Dean of Students, Ms Winfred Kabumbuli to issue a warning letter to the group’s leader for engaging in acts of 'disruptive behavior'.

The Vice Chancellor, Prof. Barnabas Nawangwe, while speaking to UBC TV about the protest, said that the students are simply engaging in acts of hooliganism and had failed to heed to guidance from the bursar.

"The money isn't enough and they have been told they will get the balance next month, which is the next financial year. I really don't know what they were trying to make noise about. It is just hooliganism," Nawangwe said.

Yusuf Musomesa Waidembe, the former government-sponsored students president said that partial payments had never been done, and also blamed the university for reaching the decision without consulting the students’ leadership.

According to a letter from the University Secretary, Yusuf Kirunda, the second semester opened at the end of the financial year thus the university has to wait for the next financial year to receive the first quarter money and then pay the balances.

"The second semester of the academic year opened ahead of the commencement of the financial year which opens on 1st July 2022. As a result, the university has not received the funds for critical obligations including food and living out allowances for government sponsored students," part of his letter reads.

Kirunda further stated that the university has resolved to pay the allowances in installments with the first 50% being released immediately and the next at the commencement of the next financial year.

Makerere University government sponsored students are entitled to a food and living out allowance each semester and this is usually paid at the commencement of the semester.