Tanzania, officially the United Republic of Tanzania derives from the country's two states, Zanzibar and Tanganyika. Tanganyika was a Germany territory in the 1880s to 1919 when it was handed over to Britain by the League of Nations during World War II in 1947 up to when it got her independence in 1961.

A spike in anti-press attacks is sowing fear and self-censorship among journalists in Tanzania. The safety of journalists in the country is mostly challenged during political rallies and demonstration, where they are often targets of harassment and aggression.

The declining standard on safety and security of journalists in Tanzania is largely driven by widespread attacks by state agents such as the police and politicians targeting journalists and media houses.

Like it is always said that a leader is meant to serve than to be served, the 5th elected president of Tanzania Magufuli has reflected this analogy through involving himself in doing things beyond his jurisdiction

President Magufuli who was inaugurated as the president of Tanzania on 5th November 2015 made a record in Tanzania when he publically joined his people on Independence Day in 2015 to clean the community.

Journalists and editors in Tanzania have singled out advertisers as one of the key forces that stifle press freedom in the country.

The journalists and editors said that advertisers use their financial muscle to demand for only positive press coverage of their activities.

A Tanzania media scholar has warned that press freedom is under threat in the country due to the media ownership structure that is dominated and influenced by government and public officials who do not want to be exposed.

Several media houses have faced the wrath of government and its officials. Some of them have resorted to tighter self-censorship to survive. 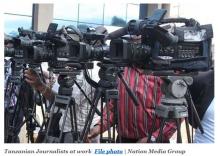 A Tanzanian journalist, Jabir Idrissa has termed the newly passed Electronic and Postal Communications (Online Content) Regulations as a big setback to press freedom saying it is meant to hide a lot of information from the public.