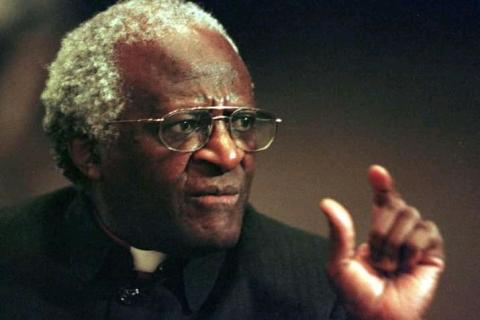 The United Kingdom has joined the rest of the world to celebrate the life of South Africa's fallen anti-apartheid hero, Archbishop Desmond Tutu.  In a statement,  the queen  condoled with the family of the late Desmond Tutu and the entire South African community. In her statement, her Majesty said the entire Royal Family is "deeply saddened" by his death.

"I remember with fondness my meetings with him and his great warmth and humour," she said.

President Ramaphosa described Tutu as one of South Africa's finest patriots and that their loss was a global loss. 'Our nation's loss is indeed a global bereavement,' he said.

Desmond Tutu was awarded the Nobel prize in 1984 for his outstanding contribution in the fight to halt apartheid in South Africa. Tutu will also be remembered for his enormous struggle to end segregation.

·       Graduated at University of South Africa

·       Trained as a teacher at Bantu Normal College

According to sources, the late Archbishop Desmond Tutu had been battling prostate cancers from as far as the nineties till the point of death. Tutu passed on at a health facility on Cape town where he had been admitted amidst attempts to save his life.

What others said about him

U.S. President Joe Biden said Tutu followed his spiritual calling to create a better, freer, and more equal world. "His legacy transcends borders and will echo throughout the ages."

Former U.S president said thus: "Archbishop Desmond Tutu was a mentor, a friend and a moral compass for me and so many others..."

"We thank God for his life. It was a purposeful life, truly well lived in the service of humanity..." Uganda's opposition icon Ssentamu Robert alias Bobi Wine said.