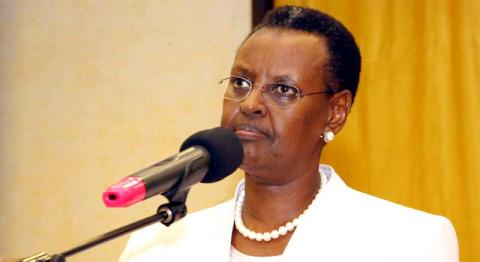 The First Lady and Minister of Education and Sports, Janet Kataha Museveni, has accused opposition political parties of funding strike against tuition increment at Makerere University.

In a statement dated October 29, Ms Museveni argues that she has got reliable information showing that most of people engaged in the strike are not students of Makerere or any other university but youths who make a fortune from taking part in strikes.

“Apparently, the political opposition in this country – who are well funded “somehow” by some “unknown sources” – find it useful to pay unemployed young people to riot wherever and whenever they believe they see they see a viable opportunity,” reads part of the statement.

The First Lady goes ahead to say that most of the students at the forefront of the strike are the privileged ones from well-to-do families and on various scholarships.

“For example, many of these students are sponsored by the government, Master Card Foundation, State House while others are the beneficiaries of the Higher Education Students Loan Scheme,” she adds.

The education minister concludes her statement by asking the students to always submit to authorities because failure to do so can attract a punitive measure.

Students say that increasing tuition fees by 15 per cent every year for the next five years is very unfair and would make it so expensive for student from humble backgrounds to join the university.

Since the beginning of the strike, a number of students have been arrested while others have been injured by security agencies that were deployed to calm the situation.

On Monday, the university management called student leaders for a way forward but the meeting never yielded results as the two parties failed to reach a consensus.

Currently, the situation at the institution of higher learning remains tense and studies in a number of colleges put to a halt.