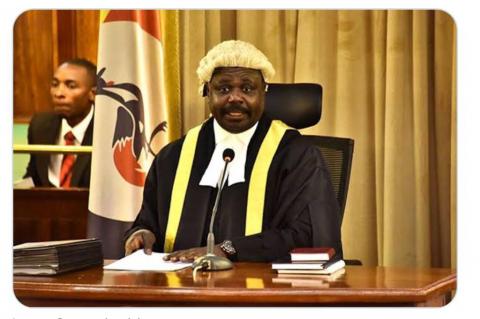 The Speaker of Parliament of Uganda, Jacob L'okori Oulanyah is dead. Oulanyah passed away in a hospital in Seattle, USA where he has been battling an unidentified illness.

His death was announced by President Yoweri Kaguta Museveni on Sunday at 1:07 pm through his official Twitter handle.

“Countrymen and Countrywomen. It is with a lot of sadness that I announce the death of the Rt. Hon. Jacob Oulanyah, the Speaker of Parliament. I got information of this sad news at 10.30am, East African time from People that have been with him and the doctor that was caring for him in the intensive care unit. He was a good Cadre. I delayed the announcement so that his children would be informed first,” Museveni's tweet read.

Oulanyah was last seen in Parliament in December 2021. By that time, he had only chaired a few sessions including the passing of the National Social Security Fund (NSSF) Bill, which permitted the mid-term access to members’ savings.

He was referred abroad on February 3rd for specialized healthcare by doctors at Mulago National Referral Hospital where he was first admitted in January. Later on, the deputy speaker Anita Among, Dr. Jane Ruth Aceng (the minister of Health), Democratic Party President Norbert Mao, Chief Justice Alfonse Owiny-Dollo, and Oulanyah's brother, Francis Emuna flew to Seattle in the United States of America to check on him.

Oulanyah, a lawyer and agricultural economist, served as deputy speaker between 2006 and 2016 under Rebecca Kadaga. He then defeated her on 24th May 2021 to become Speaker of the 11th Parliament. Oulanyah was also a Member of Parliament representing the Omoro County constituency.