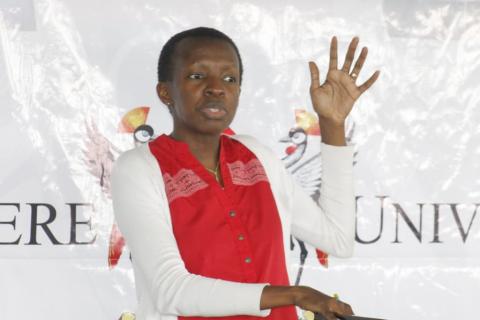 The Digital Content Manager at Monitor Publications Limited, Carol Beyanga, has described the social media position in the information world as a fundamental force but noted that professional and ethical reporting retains its central place.

While addressing the Journalism and Communication students that huddled on November 8 at the Central Teaching Facility One (CTF 1) Makerere University, Beyanga conveyed her support to the new forces of social media in the dynamic system of information circulation in the world.

“The introduction of social media to the information world stretches back much further than we think when it comes to the current world of information flow. Social media has ushered in a press regime that has undoubtedly altered the system of information gathering and dissemination to a simpler and more affordable one,” Beyanga said in her keynote address.

She noted that, access to information has been made easier in contemporary media compared to the days of the traditional media. At the onset of her presentation, she consulted five students about media channels where they browse for information shortly before they get out of their beds.

While giving responses, students soon reflected the role of new media as they referred at social media platforms such as WhatsApp, Facebook, Instagram and Twitter as their first outlets to search for information.

Christine Kabazira, a Year Four Journalism major said that, social media has shifted the faces of the media by linking the gap which has existed between the mainstream media and the audiences. “I usually check my WhatsApp and Twitter for information every morning before watching Television and reading newspapers.

Using my cell phone, I am able to navigate all websites where I need to find information in the shortest time and place,” said Kabazira. While likening notes between the traditional and the new media, the so-called social media, breaking news has remained in the hands of those who are social media-friendly.

However, the spontaneous accessibility to communication devices by everyone in the society has led to abandoning the news values and the legitimate role of the press while circulating information. Although the fresh pressures of social media have arisen with unique styles of dissemination of content, journalistic code of ethics and news values persist to be relevant.