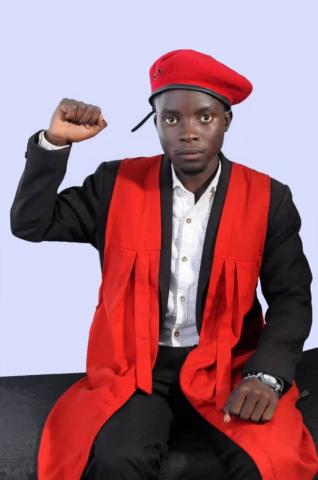 One of the suspended students at Makerere University has said he will not pick his suspension letter this time arguing that some officials within the institution are targeting him as a person.

Frank Bwambale, a former contestant to the Guild Representative Council (GRC) to represent the School of Languages, Literature and Communication (SLLC), was suspended a year ago and forced to write an apology to Makerere.

Now in his final year pursuing a degree course in Journalism and Communication, Bwambale is in trouble once again.

He is among the nine students who have been suspended for participating in the current strike about tuition increment.

A statement posted on the university website on Wednesday reads as follows: “In light of the recent student unrests and protests against the Fees Policy, Management has taken disciplinary action against some students. The following have been suspended and others warned.”

Bwambale’s name is number one on the list. Others are Saasiraabo Siperia, a third year student of Industrial and Organizational Psychology, who was recently hospitalized after allegedly being tortured by security forces deployed to quell the strike.

Another 26 students have been given warning letters. Prominent on the list is Kirabo Marion, the only student who opposed the now controversial fees policy to the point of resigning her position as representative of the School of Law to the GRC. She is now in her Year Four and a member of the current students’ guild cabinet.

The statement says the affected students should collect their letters of suspension from the Office of the Dean of Students. And this is what Bwambale says he may not do.

Bwambale says he has not been anywhere near the strike and that he was not involved in any way. He says it caught him by surprise when he saw his name top on the list of those being suspended.

While engaging fellow students on the Makerere University Journalism and Communication Association (MUJCA) WhatsApp Group, he said he’s innocent and that on the day he’s said to have led the demonstrations, he was in class.

“I was even in class that day Daily Monitor pronounced me suspended, class records have it that I have not been part of anything,” he said.

He blames Dr Elia Hisali, a professor from the College of Business and Management Science (COBAMS) and Gordon Murangira, a personal assistant to the Vice Chancellor for the current dilemma he finds himself in.

“Gordon Murangira and Prof. Hisali just hold a personal vendetta on me just like last year. I will not pick up that letter… I will take the two to the courts of law because I have their threatening phone calls and I will be attending classes,” he said.

It should be remembered that on 10th September 2018, Bwambale together with his two collegues Obbo Johnson Emmanuel and David Musiri were jailed and suspended by Vice Chancellor Professor Barnabas Nawangwe for allegedly planning to stage a demonstration over the 15% tuition increment policy. , However, on 17th November 2018 the Buganda Road Chief Magistrate Joan Ketty Acaa dismissed the case saying that the evidence by the prosecution was lacking since the basis of the arrest was never justified.