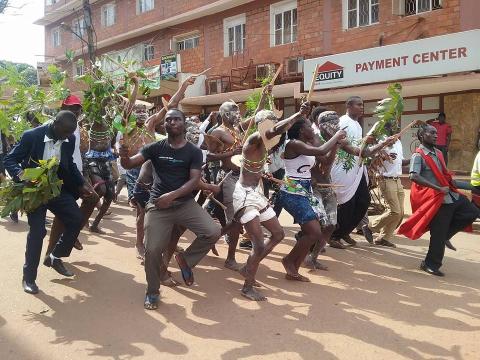 The students’ annual cultural gala organised by the Julius Kateregga–led 85th guild according to participants is not as vibrant as the past galas participants say.

Salin Aseko, one of the student participants in the 2019 cultural gala says the last two and half weeks have proven to be their greatest test of patience and faith.

Aseko and other students interviewed by this reporter have expressed disappointment on the date the cultural gala has been held citing little attention is accorded to the activity as students are preparing for exams. End of semester examinations commence on November 18, 2019 explaining the low turn up.

"We are preparing for exams, we lost three weeks in the strike and we are trying to catch up for the fourth coming exams so some of us will not make it for the cultural Gala," Aseko bitterly explains.

Today, Sunday November 10 is the climax of the two-day cultural gala competitions at University Hall (UH) Quadrangle according to Solomon Odongo, the Guild Culture Minister.

This year’s competitions are organized under a theme; Celebrating the Diversities of African culture.

"I am so humbled to present to you the paticipants and what we expect from each other us respect and cooperation for each other. Without wasting time, I would like to officially open the event" said Odongo.

The cultural groups are competing in areas of Makerere University Anthem, their original composition of a folk song, East African Anthem, Solo, Drama, the associations anthem, cultural dance and poetry. Two stages are provided for the competition.

The crowned winners for this year’s gala will be awarded with a bull, second and third will be given money. On the first day, cultural groups presented anthems, solo and drama.

Today, the different associations are presenting the association anthem, cultural dance, and poetry.

Despite the delays in the gala, the students are optimistic the gala will be good and hope to compete fairly.

"We have made adequate preparations for the cultural galla, we have trained well and now we are ready to show our tallent in culture," Okello George, the TESDA president said.

Some however several others claim the postponements arising out of the student unrest in wake of the 15% tuition increment protests disorganized them and think they might not be in position to compete well.

The gala was initially scheduled for 1st and 2nd this month but was pushed one more week which students say is eating into their time to prepare for end of semester examinations.

"We had prepared to paticipants on 1st and 2nd of November but the cultural galla was postponed and we lost moral, but anyway we shall try our best to participate" Okoth Patrick said, the cultural minister for Acholi Makerere students Association.

Prior to the gala, several messages went out discouraging students from participating in the gala citing that students ought not to pretend everything was normal, especially after their demands during the strike were not met.

“It has come to my notice that the traitors among we still we students have persistently organized a gala at Makerere University. It really hurts that our fellow colleagues are still on suspensions, others bed-ridden… it is therefore a warning to all of you that dare you not act stupidly and attend to this because you may not like the outcomes,” an anonymous message circulating on students WhatsApp platforms read in part.

"We have been interrupted with strike, even the date which was set for is inconvenient due to the incoming exams, and therefore we didn't get enough time to prepare for it".