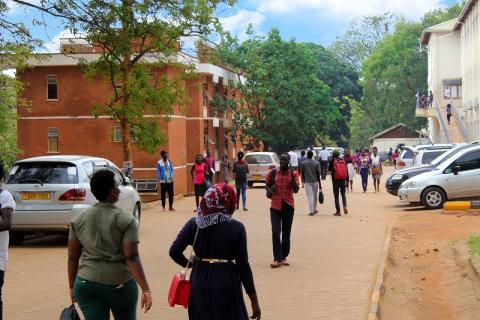 Students of Kyambogo University on Saturday morning descended on a phone thief and clobbered him to coma.

George Kasujja, 26, a resident of Banda B zone, was caught trying to flee from campus with a phone he had stolen from a first year Education student, Aisha Nalukenge.

According to Nalukenge, Kasujja attacked her when she was almost entering the lecture room, grabbed her phone, and tried to run away.

In the process, Nalukenge said she made an alarm that attracted other students who chased him.

“He was caught from the School of Management Studies and he was brutally beaten... They also rescued my phone,” she said.

Kasujja, who was bleeding profusely, was saved by Kyambogo Police who quickly intervened and took him to the hospital.

According to Brian Ochenge, a second-year Education student, the university and its environs are increasingly becoming dens of thieves. He blames the university administration for the high crime rate.

“Some places with in Kyambogo University are lacking lights most especially around the Kyambogo playground. So this has created an opportunity for the robbers to carry out their activities,” Ochenge said.